We have just launched our official webpage of BHOM blockchain DApp.

BHOM, which stands for BLOCKCHAIN ​​HOME, is a blockchain-based housing transaction platform. It is a DApp commercial service which allows users to trade and lease the house quickly and safely by using the smart contract and cryptocurrency.

※ The following text is a part of Planning Korea’s key presentation on the subject of “Connectivity of Smart City – The Smart Bridge and Blockchain City” at the Marcus Evans Smart Cities Conference, which was held on October 26, 2017 in Seoul.

Connectivity of Smart City –
The Smart Bridge and Blockchain City

Planning Korea is a CPM company in the field of urban architecture.
We have been studying for a long time where people’s thoughts go, it has also been applied to real cities by studying which programs are shared by individuals in the city.

We have determined the blockchain is the operating system for the future city.
From now on, I’d like to talk about how the concept of blockchain changes the city.

Hyper-connectivity means that everything is connected. Now We are living in a state of being unable to fall off the network for a moment, and this connectivity is increasing exponentially with the impact of smartphones. Being connected with people, refrigerator, vacuum cleaner, car, and now we lives in a society that connected with AI.

Until now the city has changed its structure according to the technological revolution of that era. It has gone through an era of industrial revolution and massive use of electrical energy, and the latest Internet revolution has decentralizing the state-led urban planning and changing the urban system itself.

In the city of Internet era, relationship through sharing knowledge and information is crucial, whereas, the city in the future will be the ‘City by the requirement of citizens’, which reflect the individual needs and tastes.
Now we are at the beginning of the hyper-connected society. It is closely related to the blockchain technology to be mentioned about.

There are three humanistic elements that have brought about urban change:
Changes in consumption patterns strengthened the shared economy, and changes in citizens’ thought increased citizens’ voice and power;
Changes in communication technology is creating a new urban form through the fourth industrial revolution;

As urban growth slows, the government-led urban development projects are being reduced. Urban development systems are changing from “top-down” to “bottom-up” led by the citizens.

This is a long-term trend that will change the form of the city.

Past cities have made rapid progress through country-led plannings. Currently, small-scale development and urban regeneration are the mainstream through decentralized system. From this, blocks with various features were born in each region.
We expect this trend to accelerate in the future, and the( urban structures will become more and more dispersed.

This is the vision of the future city to be changed by the technological revolution.

AICBM is a summarized word of the core technologies for the 4th industrial revolution, which means AI, IoT, Cloud, Big data and Mobile. In the future, these technologies will lead the industry and play a key role in urban system development.

I will briefly mention how the AICBM applies to Smart City.

First of all, AI is a rapidly developing field. In the city, AI is focused on these applications like improving infrastructure and public security. If we apply the AI, being rapidly developed, to the urban system, we will live in a society that is incredibly efficient. It is the era that a city having a good AI gains competitiveness.

It has been in the spotlight as a major service platform in the video security industry in recent years. Cloud is the basis for real-time analysis and utilization of images collected from data servers. The high demanding service via this technology in Smart City is the emergency management and public safety sector.

Cloud computing is a key element in providing an essential platform for enabling the “Internet of Things”. IoT allows things to communicate with each other, and things to communicate with people as well.
In the city, sensors and nodes are used to track pedestrians and traffic conditions, and to measure air quality, the number of devices is expected to reach 1.4 billion in 2026.
Smart LED street lights, cameras, sensors. All IoT devices are connected to each other in the city, then will make the city like a computer works by itself.

Structure of smart city made up of AICBM

Smart city with integrated AICBM works like this:
The information stored in the cloud via your cellphone is classified as big data, analyzed and commanded by AI, then spread and executed through IoT.
This is the structure the technology goes in Smart city so far.

From now on, I will talk about how a new technology called Blockchain is applied on these technologies.

Blockchain is the concept of the digital currency.
The well-known Bitcoin’s operating system, Blockchain, like its name, chains data blocks together. when a transaction occurs, the transaction ledger is stored and encrypted in this block. That is a Blockchain system. Simply, priced blocks are stored in chains. So, it’s called itself as encrypted currency, the Cryptocurrency.

This block is updated and encrypted in every 10-minute. If someone has an account, there are 52 thousands blocks produced in a year. If somebody wants to hack my information, he has to decode all the passwords in tens of thousands of blocks, which is impossible.
This is the cryptographic mechanism that the blockchain system is talking about.

Currently there are more than thousand kinds of Cryptocurrencies using Blockchains.
Bitcoin, Ethereum, and Ripple are commonly known. At the moment, the price of one Bitcoin exceeds 6 thousand dollars. Bitcoin itself is not the subject of today, but I’ld like to talk a few things of Blockchain to help you the understanding of it’s concept.

It is true that there are some controversies about the uncertain man who made Bitcoin, or about the stability of the system. However, as time goes on, the safety of the Blockchain becomes firmer, transactions continue to grow. Bitcoin’s market cap has already surpassed the Nike and Goldman Sachs.

Behind this growth it was possible because of the involvement of small investors. This is very important. Anyone in the world, possible to access the internet, can easily trade Bitcoin through a simple procedure. This is not only the factor to the financial paradigm shift, but also a factor to makes a big change in lifestyle. In fact, many banks are changing their financial systems into Blockchain.

This is how the blockchain works, very easy. If you want to deal with someone, you can just transfer the money data to the other person’s account directly. At this point, the data sent is not a copy, but the original, money, and the copies of the records is distributed and stored. Once opened, inter-individual transactions are activated.

When compared to existing financial transactions, the difference become clear. Existing financial systems are involved and complicated by many interests. Of course, they receive the commissions.
But, a blockchain system does not require a middleman, such as a bank or card company. This is the core of the crypto-system, the blockchain, that builds inter-personal trust.

According to Blockchain system, we can see that the role of financial services is reduced in transactions. So what about other areas?

There are Airbnb and Uber, the representatives of the sharing economy. The intention that they started with is obviously a sharing economy, Now they become the dinosaurs that sweep the investment in Silicon Valley. We call them platforms, which is another name for the middleman, so to speak.

In the near future, people will start to lend the room to P2P through the blockchain. The platform’s role will be reduced.
This radical change is coming.

The properties of blockchain system are: Individuality and Transparency; Dispersion; and Personal information protection, which are very important issue.
At present, personal data can be collected and used randomly by various organizations such as financial services, distributors, intelligence agencies, and even criminals. Once the information is enclosed in a blockchain, it can not be leaked. it can only be disclosed the information you want.

How this system is applied to the city is the key point of this presentation. We consider that there are two points of the blockchain to apply to Smart City.
The first is to use the blockchain as an operational management system for all transactions in the city.
The second is to encrypt and manage personal data in the blockchain. In practice, the blockchains are put to use to encrypt the image or video.

If the blockchain city is realized, it will become a ‘decentralized city for the many’
in which the power of control, energy, transportation, and wealth are distributed.

The city already has the form of a ‘shopping mall’. Because all the activities of the city are done by ‘transactions’. We ride the subway, pay tolls, buy things, receive products, use electricity, and make phone calls. Yes, consumption has been already an operating principle of the city. If the blockchain is adopted as a trading system for the city built with AICBM, it will be the beginning and the end of Smart City.

With the blockchain system, Smart city will fully protects the privacy of registered individuals and will transparently manages all transactions in the city.

Then, how does a blockchain system apply to a real world?
Let’s take a look at the actual cases.

Most of all, the energy sector is adopting blockchain most rapidly.
This is Brooklyn’s micro-grid, staring in last year and expanding. It is a system to supply and trade electricity by blocks connecting generators of each house. The thing is, to use blockchain to store and trade electricity, Ethereum is the major currency for this. As a solar power producer sells to his neighbor, it is a example of P2P energy trade that does not depend on local governments or electric power companies.

Blockchain technology enables consumers to search and pay for transportation service directly. In addition, each vehicle would securely share data about driving, and shared car usage and car insurance fee would be automatically charged.

Amazon has introduced a service to pick up products without paying at Mart, Blockchain is applied here. If this system is commercialized, we don’t have to line up at Mart. This payment system tracks your purchase from the pre-certified blockchain account and charge automatically. The efficiency of urban life will be even higher.

Logistics is known as the most suitable industry for blockchains.
Walmart has applied blockchains to the delivery and tracking of pork in China, the system is well suited for identifying the origin of farm products and commodities. This reveals the whole process to consumers. Blockchain affects the safety of our food on the table.
In Antwerp and Rotterdam in Europe, the port logistics system s being changed into a blockchain as well.

For the last, I’d like to mention about the applications of the public sector.
At present, in Estonia, blockchain systems are being used for elections, in Honduras, it is used in real estate registration systems. Like these cases, blockchain system is directly related to urban democratization. In particular, the attempt for welfare benefits using blockchain in the UK shows that it is possible to heal the city through the blockchain.

We need to redefine what smart means. If the city gets smarter and the polarization of wealth gets worse and you have to work more, and the society gets more complicated, it is not really smart city.
Blockchain, as intended at the very start, will serve in distributing wealth, working efficiently, and dispersing cities. I hope that this innovative system will be applied to all cities where democracy needs to be extended.

※ This is a full text of Planning Korea’s key presentation originally delivered at the Marcus Evans Smart Cities Conference, which was held on October 26, 2017 in Seoul. 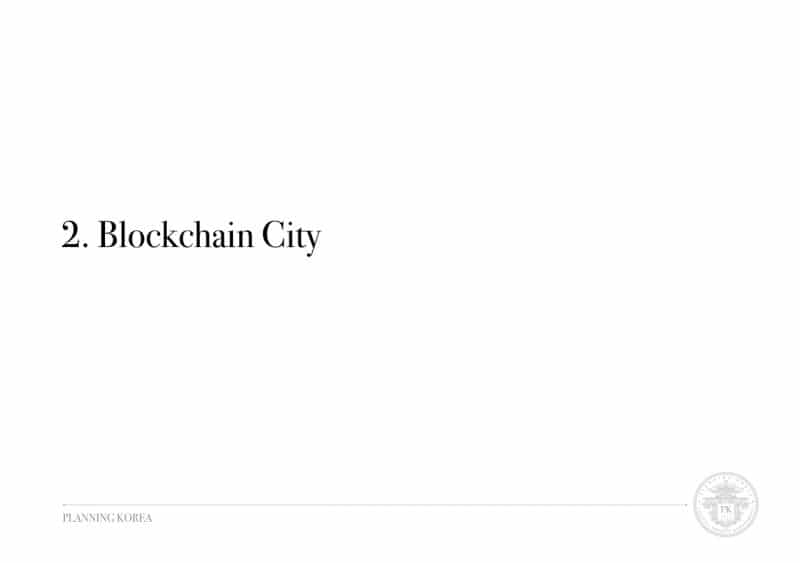 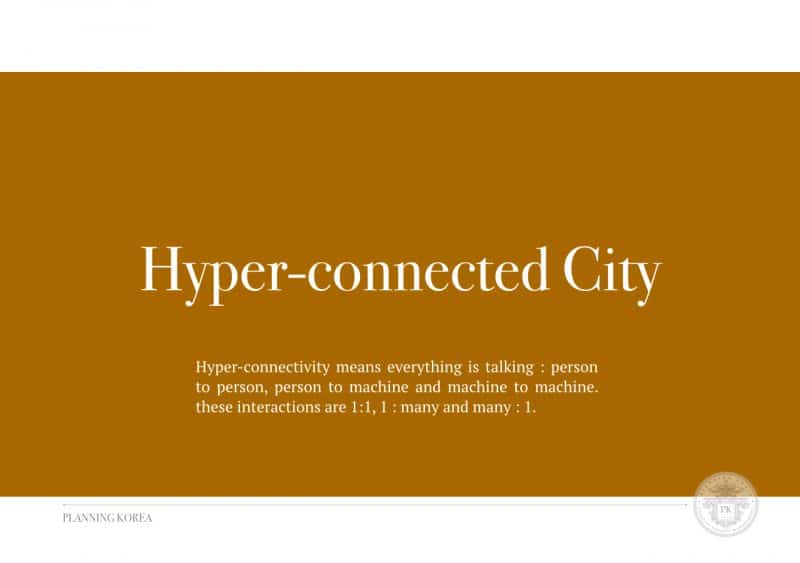 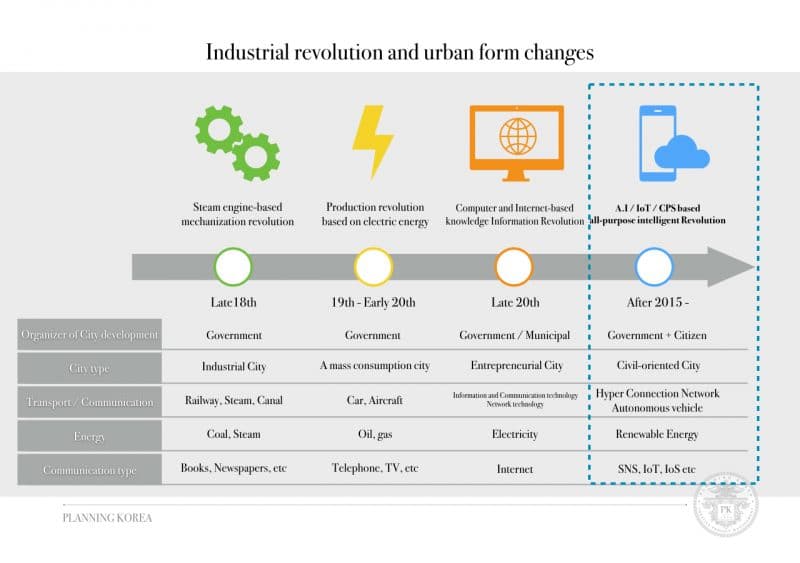 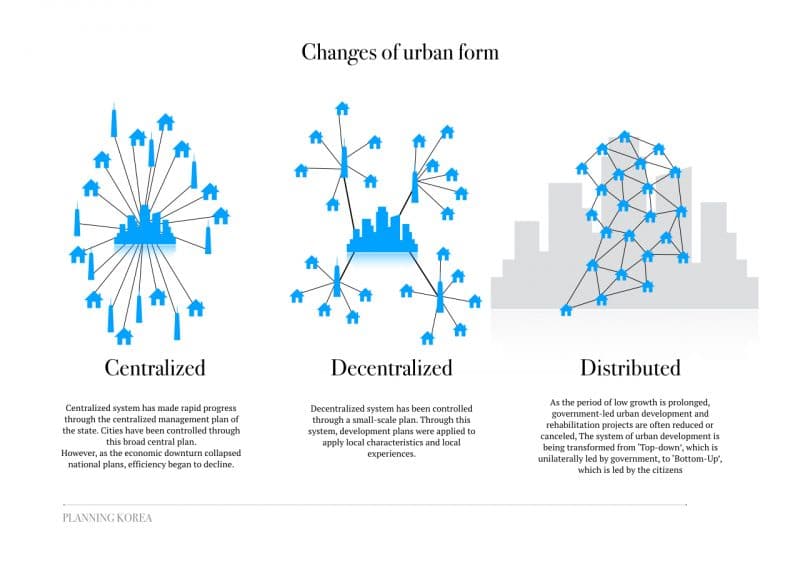 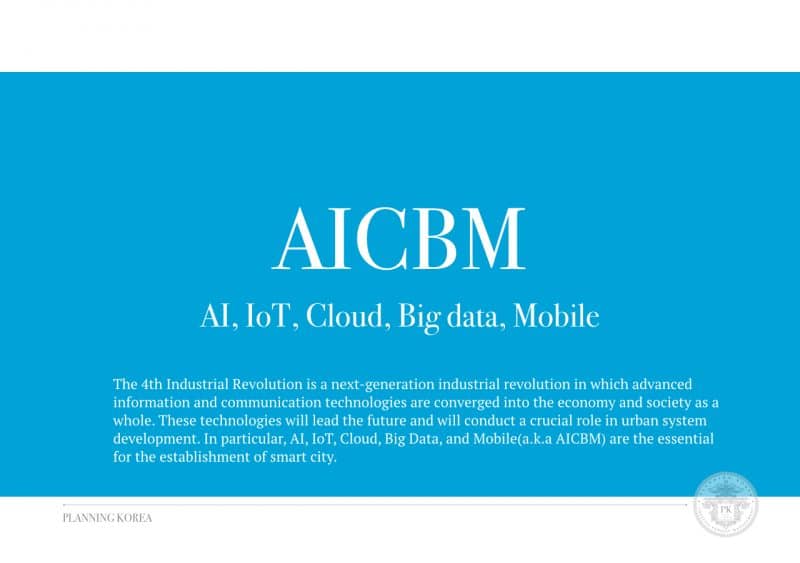 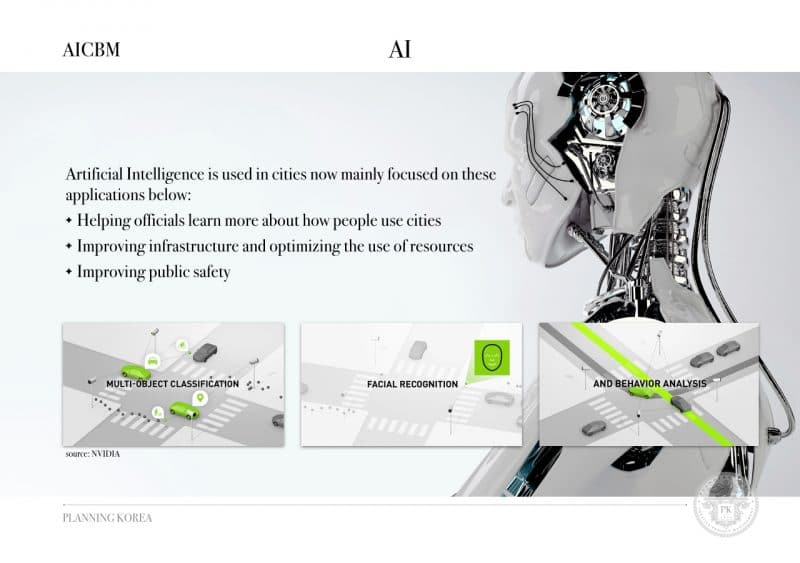 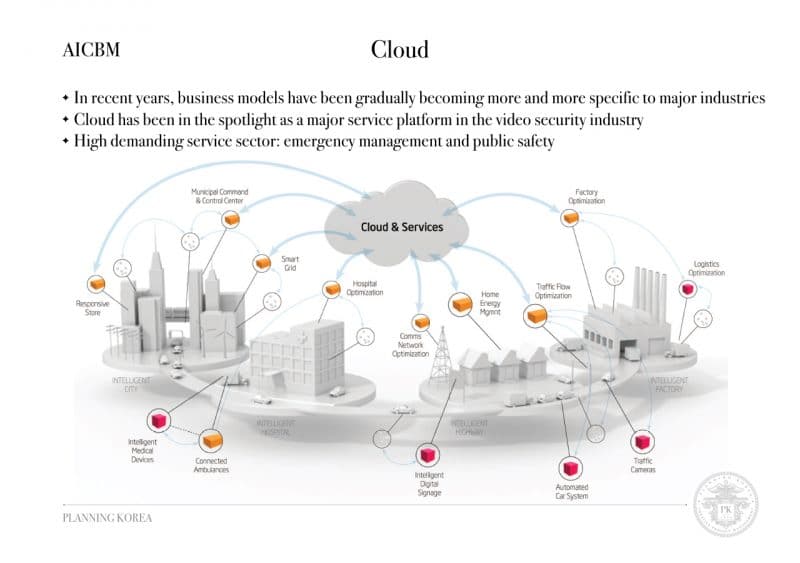 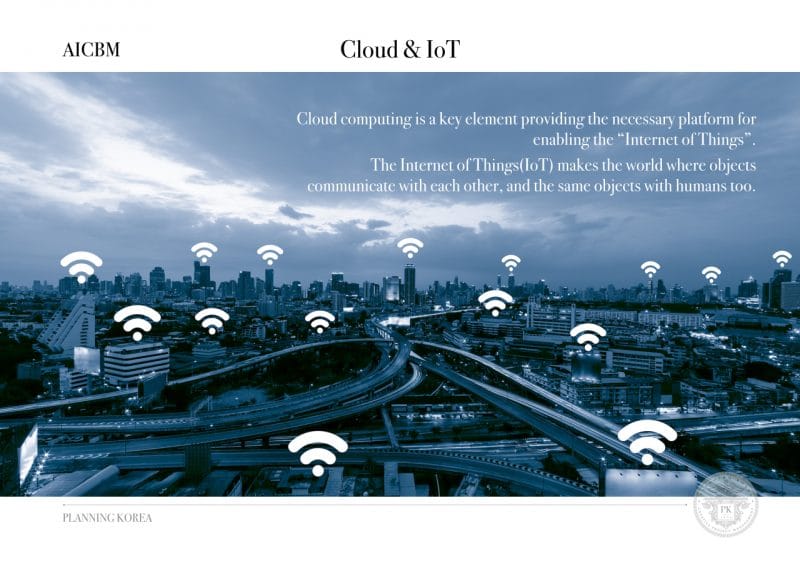 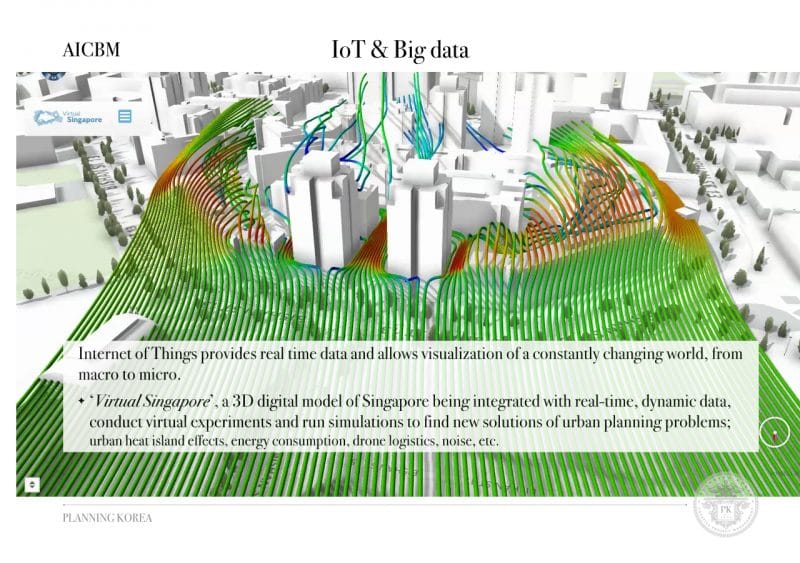 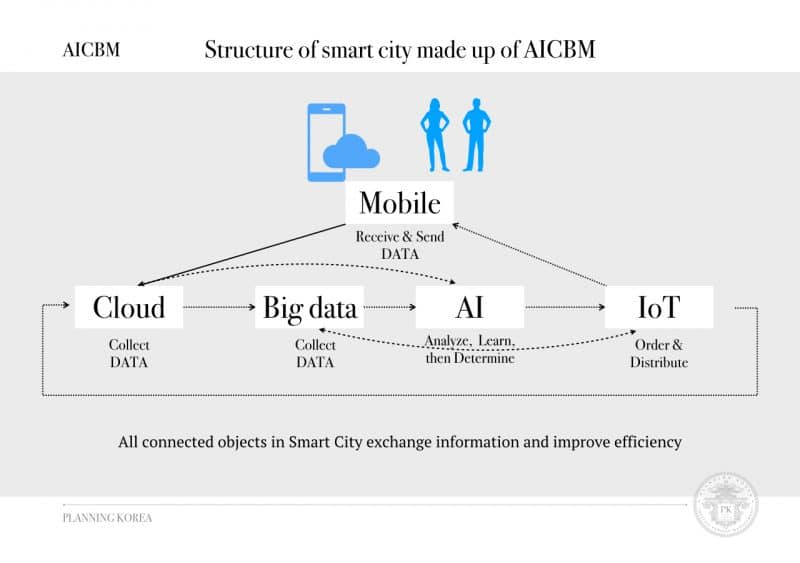 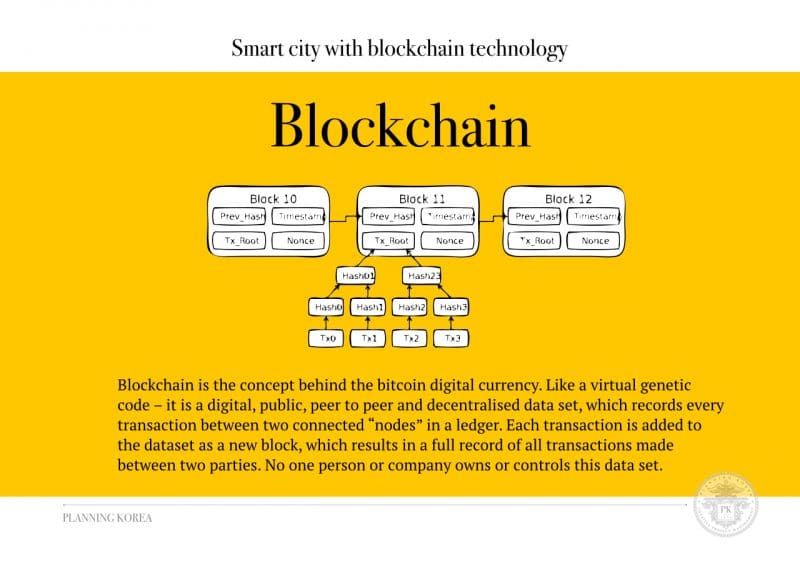 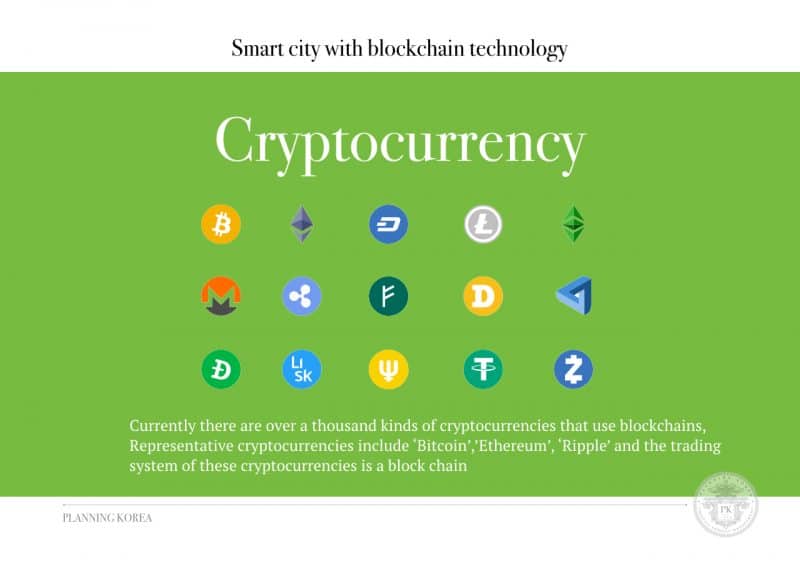 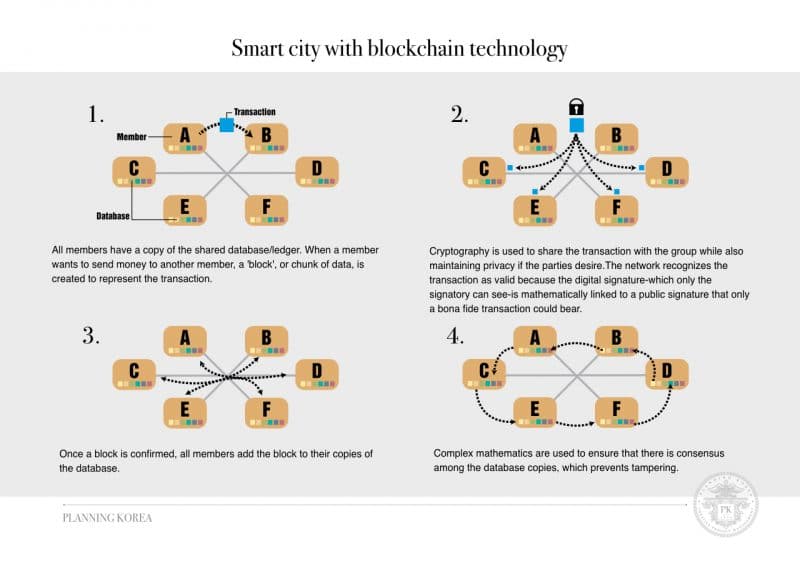 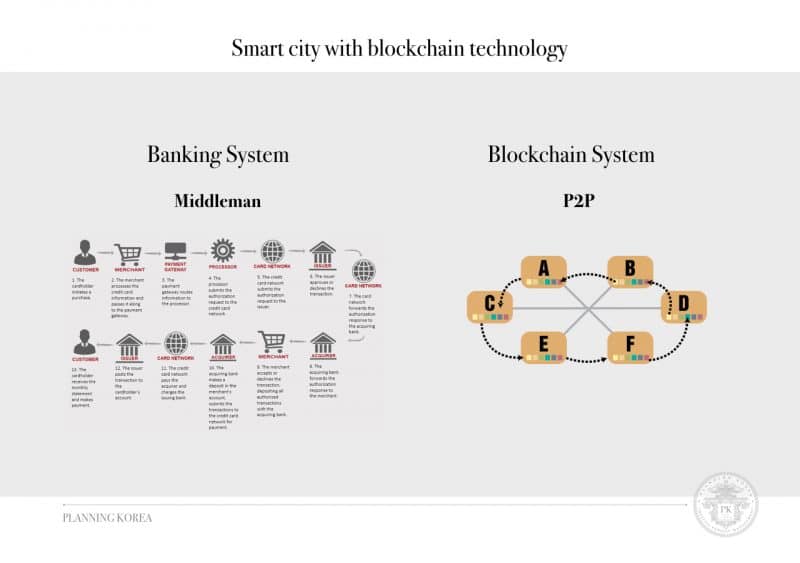 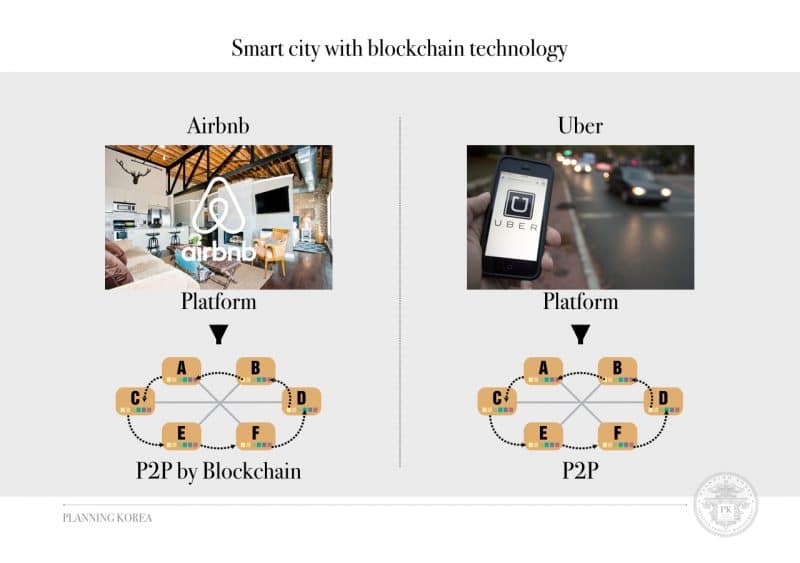 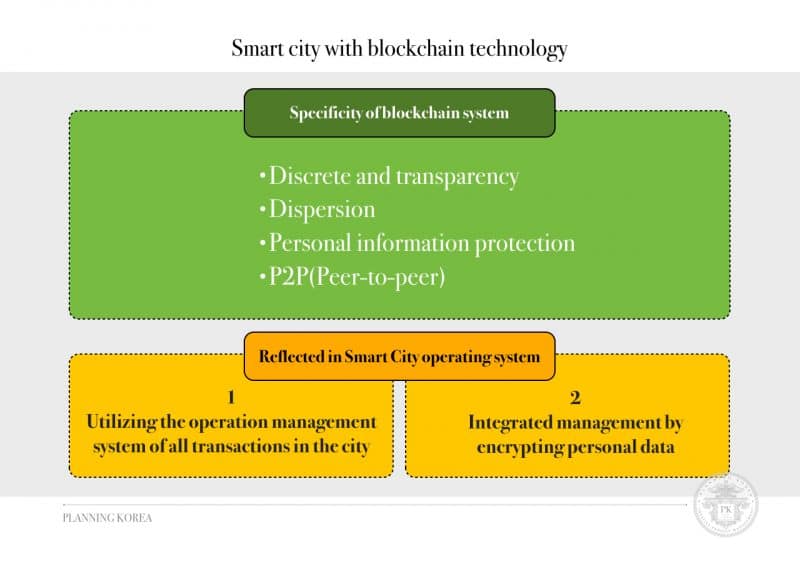 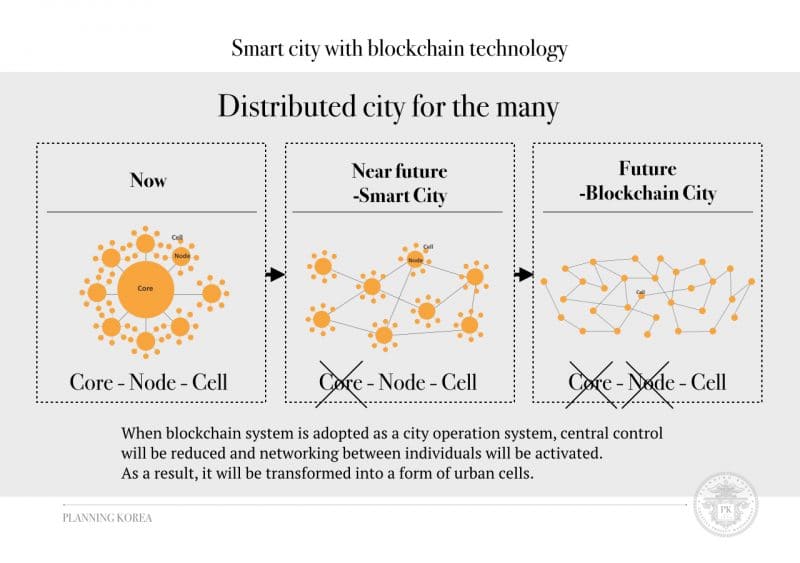 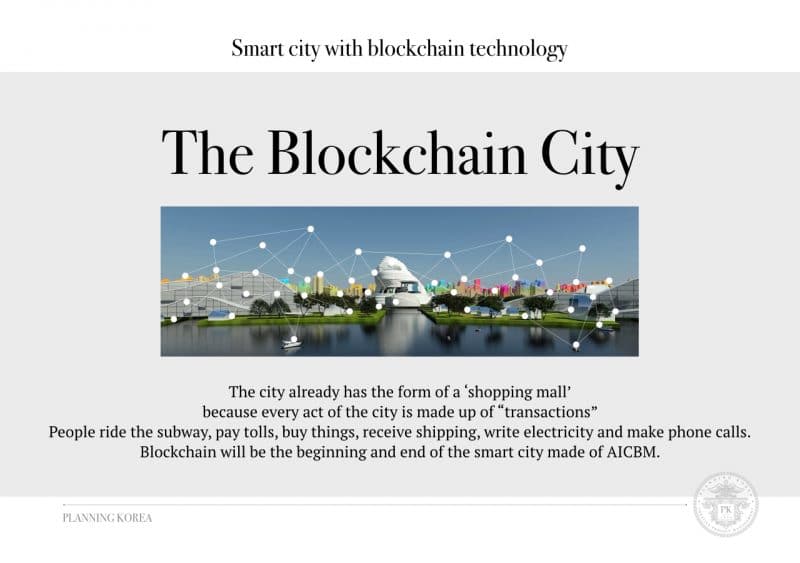 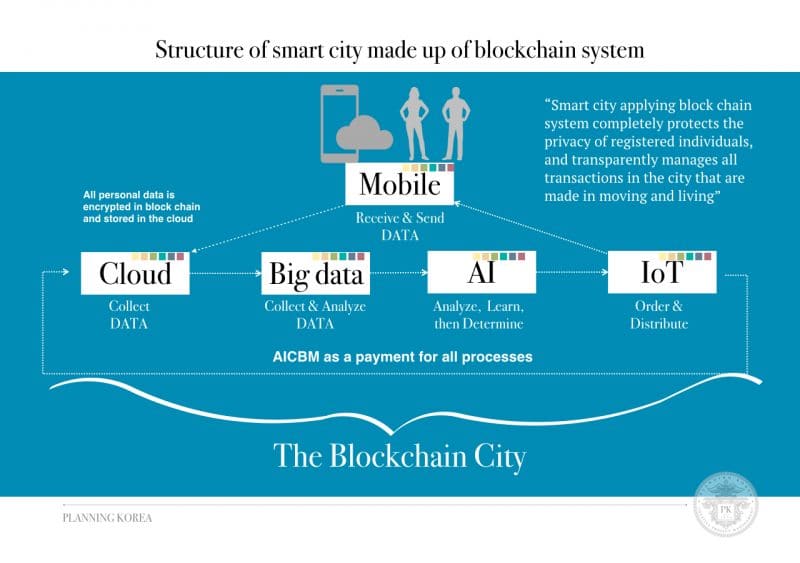 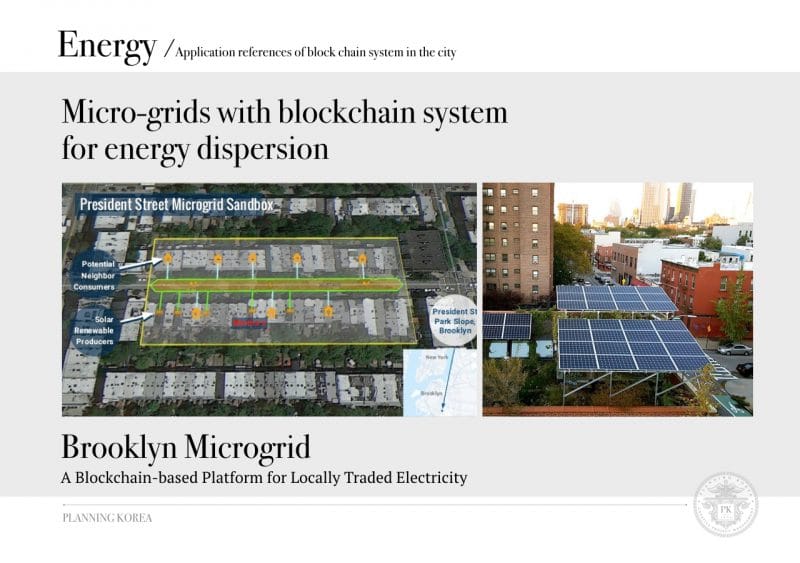 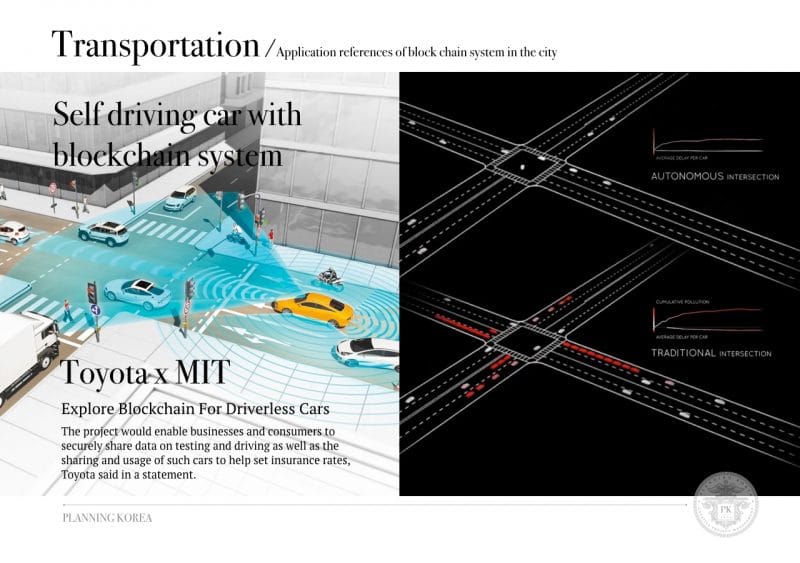 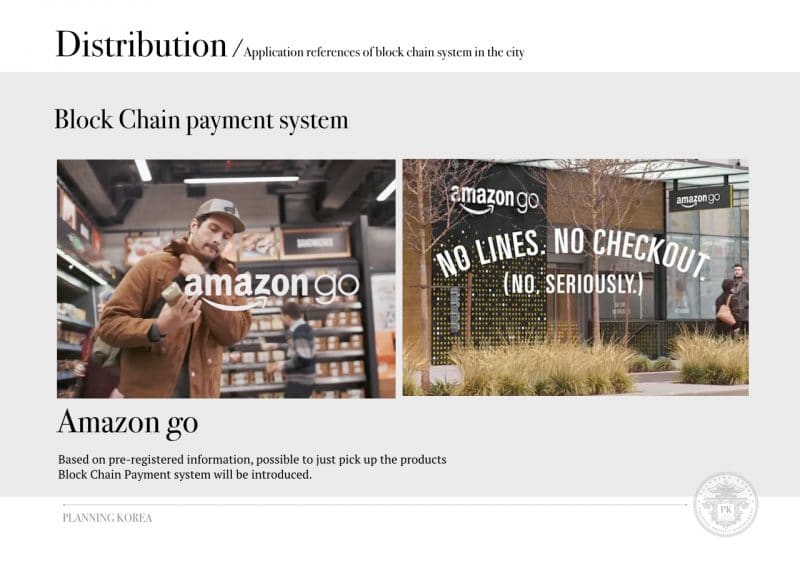 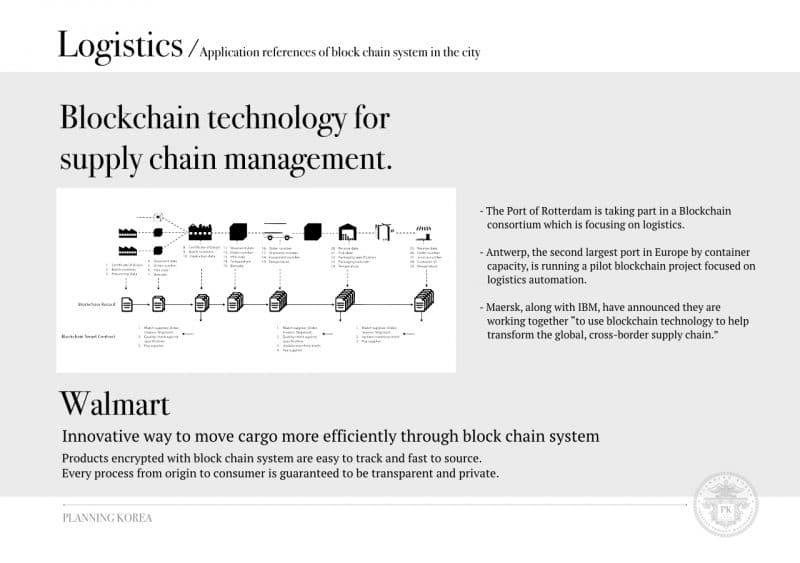 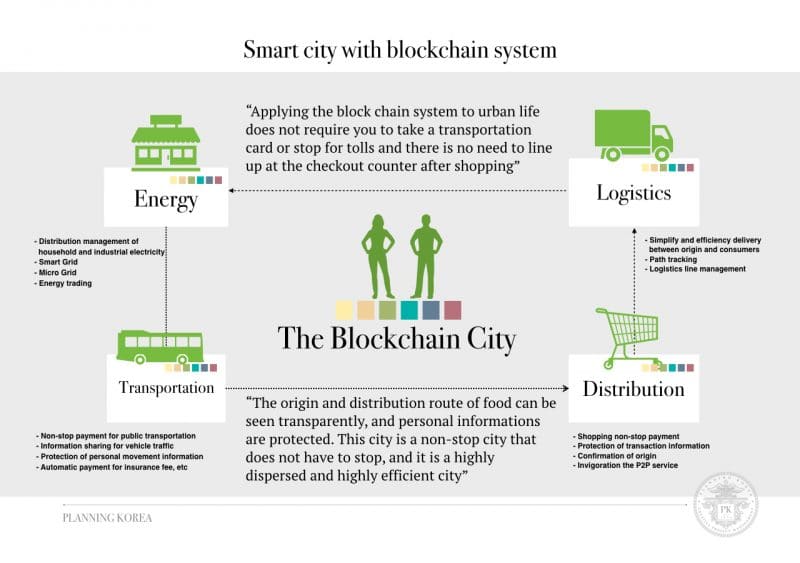 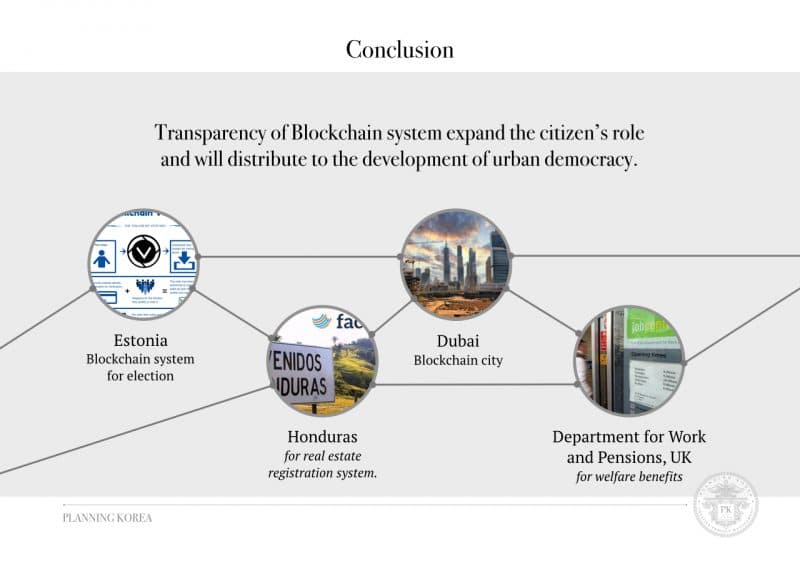